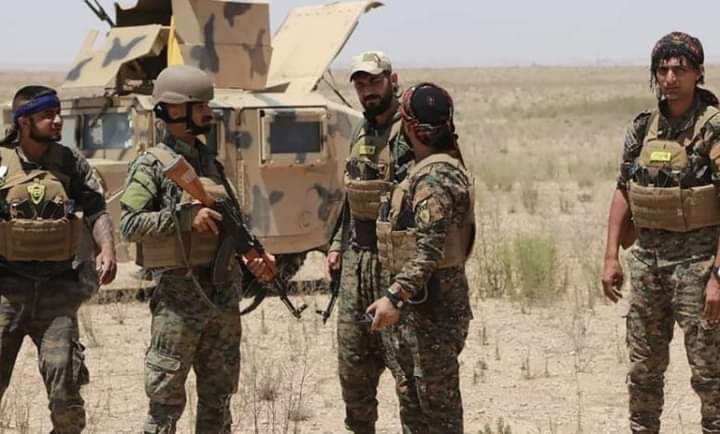 Hundreds of Arab tribesmen demonstrated in al Hasakah on the night of Tuesday-Wednesday (October 6), and they repelled an attempt by a large military force from the “SDF” organization, and for the second time, to steal a power transmission station and transfer it to sites belonging to the American occupation.
Official sources told the Russian “Sputnik” agency that the residents of the town of (Tel Brak) and the surrounding villages, northeast of the city of Hasaka, prevented a military force affiliated with the “SDF” organization, consisting of 14 vehicles accompanied by large trucks, that tried to transfer equipment and supplies from an electricity transmission station (Nes Tal). feeding the town and its neighboring villages with electric current.
The sources indicated that a power transmission station (Tel 66/20 KV) is considered an electrical connection station between the cities of Al-Hasakah and Qamishli, and is responsible for feeding the area (Tel Brak) and the surrounding villages with electric current, accusing the “SDF” organization of trying to steal the transformer and its equipment that it delivered. Its value is millions of Syrian pounds, and it was transferred to sites occupied by the US army near the Hasaka oil fields in the town of Rmelan, north-east of the province.
The sources pointed out that the residents of the area, who are members of the Arab tribes, succeeded for the second time in confronting the SDF militants and preventing them from stealing the electrical station and transferring it, just as they did before that when they prevented other armed groups from stealing it during the past years that preceded the SDF’s control of the area.
The sources called on international organizations and bodies to intervene to prevent the depletion and theft of the Syrian people in the area of ​​the Syrian Jazeera.

According to the investment manager’s words: Preventing precautionary seizure of any investor except by virtue of a judicial decision
For the first time… Four cases of people infected with “black fungus” were recorded in Idlib