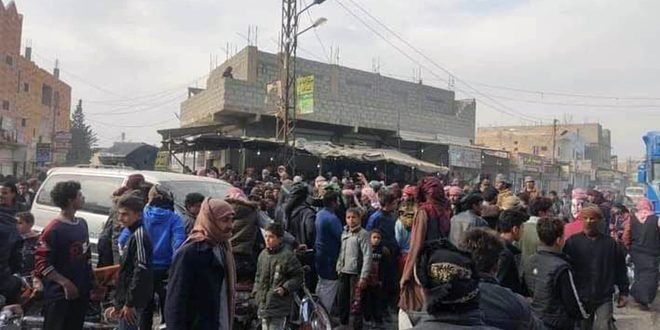 On Monday, violent clashes erupted between the residents of the town of “Abu Hamam” in the eastern countryside of Deir Ezzor, and members of the “SDF”.
Local sources told “hashtag” that the clashes took place against the backdrop of the SDF forces trying to arrest a citizen of the town on the pretext that he belonged to the terrorist organization “ISIS”. This led to the opposition of the people and the occurrence of clashes using light and medium weapons.
The sources added that the clashes led to the injury of one of the town’s residents by bullets fired by “SDF”.
The people of Abu Hamam village denied the accusations against the wanted person, and attributed the reasons for the “SDF” to do this act as an attempt to sow fear in its areas of control, coinciding with the possibility of the re-emergence of ISIS.


Observers made it clear that the increase in the steps of the SDF comes in conjunction with the launch of the comprehensive settlement process for wanted persons in Deir Ezzor province, which was launched by the Syrian government on the fourteenth of this month, for fear that many of the people of the island will go to settle their situation, as evidenced more by its procedures in closing the crossings linking between its areas of control and the areas of the Syrian state, including the river crossings or the land crossing in the “Salihiya” area in the northern countryside.
Hashtag – Othman Khalaf