الرئيسية » By kidnappings and shootings, “SDF” pursues “citizens who took the initiative to settle their situation with the Syrian state.” 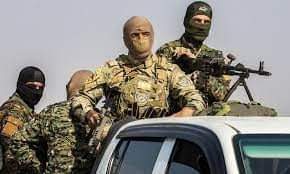 Local sources in Deir ez-Zor confirmed that a number of citizens coming to the settlement centers opened by the Syrian state, with the aim of settling the status of wanted persons, were subjected to shooting by SDF points spread on the banks of the Euphrates River from the direction of the Jazira region.
The sources revealed to “Hashtag” that many citizens were injured, who had regularized their status, not to mention that many of them had been kidnapped.
Hashtag sources confirmed that the reported recorded injuries amounted to ten cases, in fact more than that, and the number of kidnapping cases that were behind the SDF was not revealed.
The aforementioned targeting cases come after the launch of the settlement process for wanted persons in Deir ez-Zor governorate, which recorded numbers of more than 18 thousand people in the centers of the cities of Deir ez-Zor and Albukamal and the squares opened for this purpose.
The SDF resorted to closing the river crossings and the land crossing in Salhiya, which connects its areas of control with the areas of the Syrian state, to prevent the influx of those wishing to settle, not to mention issuing decisions to dismiss those of them who work on projects of international organizations active in the area.
The cases of targeting these people are often attached by the “Syrian Democratic Forces” to the organization of “ISIS” to keep the accusation away from its members, while the people assert that they are the ones behind these acts.
Observers indicated that these practices express the state of anxiety and fear experienced by the aforementioned militia as a result of the turnout of settlement centers, which recorded the influx of large numbers from the Euphrates Island, including personalities who had leadership positions in the SDF itself, such as Sheikh “Khalaf al-Asaad.” who headed its legislative council in Deir ez-Zor, in addition to “Hamad Al-Ghadeer”, who had the position of administrative commander of the internal security of the “SDF” in the areas of “Hajin” and “Abu Hamam”, and others.
In a previous report, “hashtag” referred to the high prices of smugglers who are sought by those wanted for a settlement, in order to secure their arrival from there, away from the eyes of the “SDF” elements and their control points that prevent citizens from crossing into the areas of the Syrian state since the start of the settlement process.
Hashtag – Othman Khalaf

Director of the Cardiac Surgery Hospital in Damascus calls for pressure relief: “Provincial hospitals are not working!”
Threatened to publish private photos.. Arrest of a gang that blackmailed a “Homsi” merchant for 400 million pounds