الرئيسيةEnglishIn an unprecedented phenomenon, a sudden migration of bees in Daraa.
English

In an unprecedented phenomenon, a sudden migration of bees in Daraa. 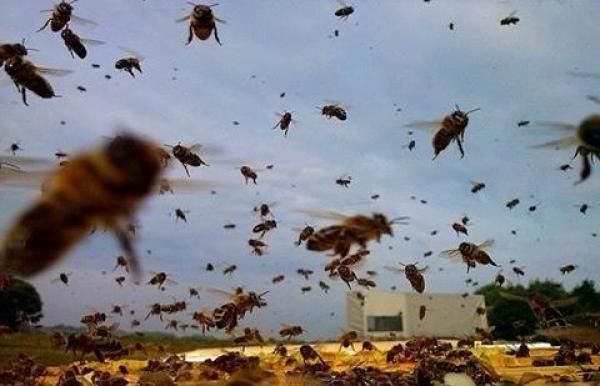 Bees colonies in some areas of Daraa witnessed a sudden migration in an unprecedented phenomenon.
The Ministry of Agriculture stated on its Facebook page that the Minister of Agriculture, Hassan Qatna, had formed a committee comprising specialists from Damascus University and the General Commission for Scientific Agricultural Research, to study the causes of this phenomenon.
The Directorate of Plant Protection in the Ministry, Dr. Iyad Muhammad, stated that investigations and studies regarding this phenomenon are still ongoing.
And that the available data showed that the phenomenon of collapse and migration of bees had previously been recorded in a number of countries of the world, especially in Europe, America and Africa (Morocco), and it was linked to high temperatures and lack of precipitation, and its impact on the abundance of pastures and the consequent lack of resources necessary to feed bees.
Dr. Muhammad confirmed that the Ministry of Agriculture conducts the necessary analyzes and laboratory tests to determine whether the phenomenon is satisfactory or not, and to develop solutions and appropriate procedures for it.
The committee toured many beekeepers, took samples to accurately determine the causes of this phenomenon, and developed a program of good beekeeping practices.
And that a meeting will be held with the Union of Beekeepers, ACSAD, the Association of Beekeepers and Research, the University and Animal Health to discuss the causes and factors of this phenomenon and ways to reduce its effects on beekeeping.

To solve the problem of the high cost of broilers and eggs..the Ministry of Agriculture promises to support corn as well as wheat