الرئيسيةEnglishThat's why dozens of trucks are waiting on the Iraqi border!
English

That’s why dozens of trucks are waiting on the Iraqi border! 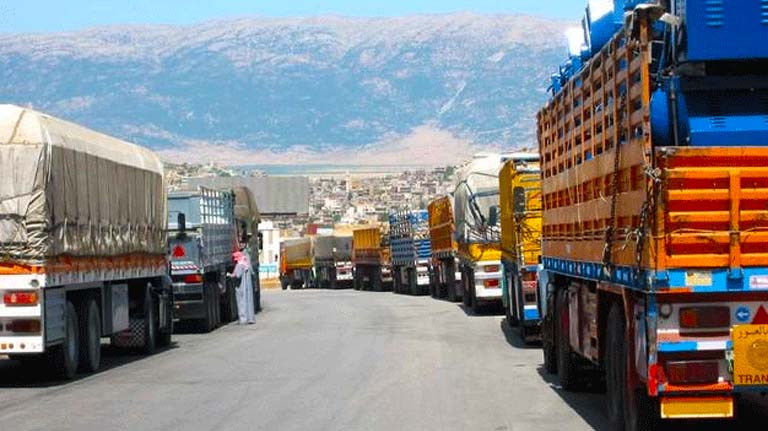 A member of the Committee of Traders and Exporters of Vegetables and Fruits in Damascus, Muhammad al-Akkad, said that the reason for dozens of shipments stopping at the Syrian-Iraqi borders is the lack of Iraqi cars to transport Syrian goods, which may also be waiting for the decision to allow Syrian trucks to enter Iraqi territory.
According to Al-Akkad’s statements to “Hashtag”, the export quantities have declined during the past periods due to competition from the Turkish, Egyptian and Iranian markets for many types of vegetables and fruits, while shipments of citrus exports continue so far, also in small quantities to Iraq.
As for the member of the board of directors of the Syrian Federation of International Shipping Companies in Syria, Hassan Ajam described the stopping of Syrian trucks on the Syrian-Iraqi borders as a decision by the truck owners.
In exclusive statements to “Hashtag”, Ajam said that the reason for the decision to ban Syrian trucks from entering Iraqi territory was the spread of the “Corona” disease.
But after some of the restrictions of Corona were lifted, the decision to return and allow trucks to enter Iraqi territory was neglected.
According to Ajam, many export truck drivers are waiting for the ratification of the decision allowing them to enter Iraqi territory within the next few hours.
Ajam stressed the decline in the volume of exports due to the economic conditions and the crises that Syria and many neighboring countries and countries of the world are going through.
It is noteworthy that on September 30, 2019, the Syrian government reopened the “Al-Bukamal” crossing (which is located on the Iraqi side), years after it was closed due to ISIS’ control over large areas of the two countries.
The crossing’s revenues during the first half of 2021 exceeded 646 million Syrian pounds, an increase of about 41% over its value during the first half of 2020, which amounted to about 381 million pounds.
Among the most prominent Syrian goods that are exported to Iraq through the crossing are fruits, some citrus fruits and some foodstuffs such as biscuits, in addition to some manufactured goods such as plastic materials and clothing.