الرئيسية » Twelve Jews from the “Jagati” family of Syrian origin visited Damascus: “A family visit for the purpose of treating their teeth” 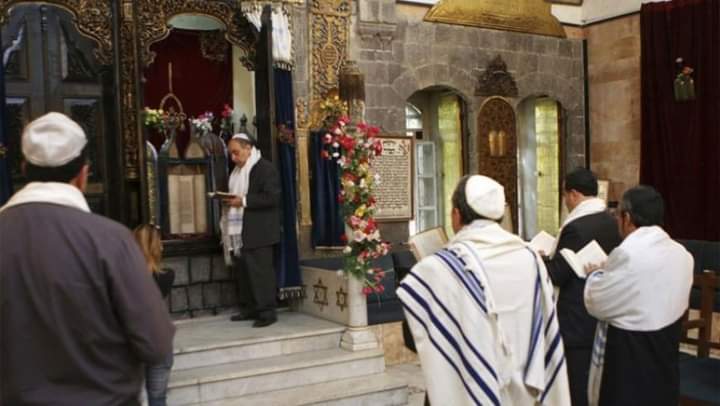 During the past month, social media circulated reports that a group of Jews of Syrian origin visited the Syrian capital, Damascus. The Jews who visited Damascus said that they came for a family visit, and for dental treatment because of the cheaper treatment in Syria compared to the United States.
The Hebrew newspaper “Times of Israel” talked about the issue in a report published yesterday, Saturday, considering that the war in Syria and the fraught relations with “Israel” made the visits of Jews of Syrian origin to Damascus seem unlikely.
“Joe Jagati” (a member of the 12-person Jewish group that visited Damascus) revealed the truth of the visit to the newspaper, saying that the trip was “a family vacation for Syria and was not linked to any party.”
The Jagati family, originally from Syria, moved from Damascus to New York in 1996, after most of the Jewish community left Syria. “Joe” arrived in New York as a young child, and said that he grew up in a family that spoke Arabic and always remembered Damascus, according to the newspaper.
Jagati visited Syria as a child in 2010 and had considered visiting it with his family again, but the outbreak of war made that difficult. The newspaper quoted him as saying that he started paying attention to his Syrian roots a few years ago, and downloaded an application to learn the Arabic language, and became proficient in it, as he reads and writes with it.

He added, “After most of the areas returned to the authority of the Syrian government, I decided to visit Syria and stayed there for 21 days with a friend.” He says that he has visited Damascus 10 times so far, the last of which was with his family of 12 people, when he convinced them of the last visit.
The newspaper pointed out that Joe still retains his Syrian citizenship, and does not find it difficult to enter the country, as he flies from Dubai to Beirut before driving for hours to the Syrian capital.
While in Damascus, the family visited Jewish sites there, including the Frankish synagogue where his parents had married, and met the few remaining Jews in the city. Jagati denied that the visit was an invitation from any party.
Last November, American media reported that 12 Jews from Brooklyn of Syrian descent have visited Damascus in recent days, decades after their departure.
The channel quoted one of the Jews who visited Damascus that the main purpose of their visit is to conduct examinations and treatment for their teeth, as this is “cheaper in Syria than in the United States.”

After it became a rare commodity… 4 people were arrested in Latakia, who “established a facility” for the production of frying oil from water
The Minister of Irrigation inspects the Euphrates “without media coverage”… Has the issue been out of media circulation?