الرئيسيةEnglishThe revival of smuggling from SDF-held areas to the state: the number...
English

The revival of smuggling from SDF-held areas to the state: the number of those who have been settled exceeds 13,000 throughout the monastery 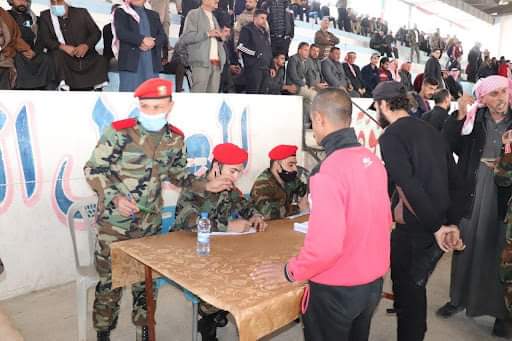 The measures taken by the “Syrian Democratic Forces – SDF” to close the river crossings linking their areas of control with the areas of the Syrian state to prevent the flow of wanted persons wishing to settle their situation opened a smuggling market.
Local sources confirmed to “Hashtag” that large numbers of wanted persons want to go to the centers opened by the Syrian state to settle their situations, especially those wanted for security issues or fleeing soldiers who are forced to pay high sums of money to smugglers in northeastern Syria.
The sources indicated that the smugglers ask for sums ranging from 75-100,000 Syrian pounds for one person to allow him to cross and secure the means of transportation for him, and in many cases it reaches 125,000, and smuggling of these people takes place on river boats away from the eyes of the “SDF” elements deployed on the banks of Euphrates River .
And the “SDF” had taken measures against many of the sons of the villages and towns of the island who settled their situation by dismissing them from their workplaces, especially those who work with international organizations active in the region, followed by a complete closure of the river crossings and the land crossing in Salhia leading to the areas controlled by the Syrian state.
Reconciliation operations for wanted persons who “did not kill civilians or military personnel” continued in the city of Al-Bukamal for the sixth day, as the number of those whose statuses were regularized exceeded 3,000, while the total number of those whose status was regularized in Deir Ezzor governorate exceeded 13,000, according to the head of the Reconciliation Center. Sheikh Abdullah Al-Shalash, noting that the work of the committees will move after Al-Bukamal to the western countryside of the governorate, expecting that they will begin their work there next Wednesday or Thursday.
Hashtag – Othman Khalaf

المادة السابقة“Dreams” in Parliament: Demands in the People’s Assembly to raise salaries by 300%
المقالة القادمةIn countries of extreme poverty… “Bloggers” announce “luxury” products for the upper class: Is there no shame?!
مدونات ذات صلة
English

In continuation of the raids and arbitrary arrests, “SDF” kidnapped 16 journalists in eastern Syria

With American support, “SDF” launches a revenge campaign against one of the tribes of Deir ez-Zor

Syria: SDF-controlled areas suffer from meningitis.. WHO is recording, and Syrian health is monitoring

Carrying ten thousand tons of wheat and barley .. the ship “Laodicea” arrives at the port of Tartous in Syria